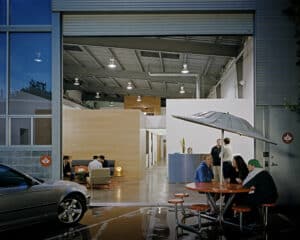 Brand New School is a highly successful production company that designs commercials for major national and internationals accounts, including Sony and Motorola. With an office in New York as well as Los Angeles, the company draws on its fresh, creative talent to design and develop innovative visual concepts.

Brand New School desired an extensive overhaul of the new space it acquired for its Santa Monica—based operations. Jonathan Notaro, owner of brandnewschool, wanted the office to embody the precision and organization in which the firm functions. It was also important that the space reflect the production company’s informal style and personality. Originally marked by its asymmetrical walls and dysfunctional organization, the space was completely gutted and redesigned. The architect and client embarked on a highly collaborative journey to design and specify the interior space to foster and reflect the company’s focus on communication and creativity.

The space needed open and enclosed areas to accommodate the specific functions of animators, graphic designers, art directors, and freelancers who join the company for extended periods. brandnewschool’s emphasis on process made it critical that the adjacencies facilitate movement and production. Each element of the design is meticulously programmed to allow the operation to run seamlessly.
Like a building within a building, the space has two volumes: the soaring aluminum ceilings, skylights, and concrete flooring of the original shell; and the asymmetrical, but balanced, tightly-planned interior construction that houses both enclosed and open work spaces. The clean, linear organization of the assembly allows the free exchange of creativity while also reflecting the precision and exactness of the company’s work.